In the beginning, the Food God (a talking cookie) created the hummus heavens and the eclair earth. And Food God said, “Let there be a buttery vessel that will teach Stephanie a lesson about animation!”, and there were croissants.

I’m assuming that’s how croissants were born because there must have been a divine God to create something so delicious AND wise at the same time.

Thanks for your creation talking cookie! You really helped me to improve this animation:

The lesson all began when I posted about improving your field in the art ecosystem by exploring other areas of influence. So two weekends ago, I decided to explore making croissants!

Now making croissants is no mean feat. It took me 2 days. 2 DAYS. From butter making love with dough to mouth = 2 days. It’s not that I read the recipe at the speed of rock, it’s that the layers of a croissant require butter to be folded into the dough and then left for an hour to rise. Then taken out of the fridge and rolled out, folded, left to rise, rolled out, folded, yada yada and so on for a total of 4 times. 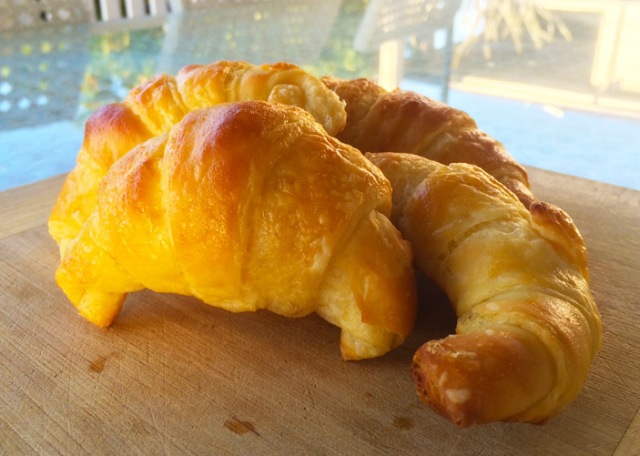 The fatty moon ships of buttery gold that I made. *Descends into gargling drool pit* – gluhhhghggh…

Where the croissants emphasised a lesson of value was in the rising. In the step where I put the pastry in the fridge to rise and do something else for an hour and come back, the pastry has changed. It’s risen. When I roll out the dough, I can start to see more layers of the butter than when I first began.

Improving animation is sometimes like making croissants. In the time between when you think an animation is finished, and you go back to improve it once more, something has changed. YOU have changed. You’ve gone away from it, thought about Mario Kart/life, and come back to something completely different to the way you left it. Like the layers of butter being exposed in the pastry, suddenly the flaws in your animation rise to the surface and you can see what everyone was talking about when they said something could be improved.

Why does this happen? I think it’s because you stepped away from it and came back with a level of openess to viewing the whole piece, rather than focussing on the individual cogs that make up the machine.

Even Richard Williams says he viewed his work differently after he finished his film The Little Island (1958):

“Three years later, when I’d finished the film, the unpleasant realisation slowly crept up on me that I really didn’t know  very much about animation articulation, that is, how to move the stuff.” The Animator’s Survival Kit: Expanded Edition 2009, p1.

That’s what happened to my Tailor animation. About a year ago, I handed in this jumping ball with a tail thinking that I’d done a great job. Yet I was left with the advice that I should track the tip of the tail to improve it. I didn’t see the point.

A year later, I viewed it back and instantly could see that something was off. I tracked the tail as I’d been advised and voila! I could see the problems with my haphazard motion path:

Tracking the tip of the tail shows a jagged motion path.

What I learnt about squirrels is that they can move ridiculously fast. They dart around, a bit like birds. That’s why it makes sense when Hammy the squirrel drinks an energy drink in Over the Hedge (Kirkpatrick & Johnson, 2006) which makes him runs so fast that he sees the world stand still. That’s why Scrat in Ice Age (Wedge & Saldanha, 2002) can hop up and down in just 3-4 frames and it doesn’t phase the audience.

So I did a test at work one day with a new Squirrel rig and made my squirrel bounce fast and low like a real squirrel:

The other thing I realised is that if the squirrel is moving fast (and it’s not actively controlling the tail), then it doesn’t look right if the tail moves in huge, glorious arcs. If it’s moving low and fast, the tail is more likely to stream out behind it in a small wave path. Bigger tail arcs are for bigger and slower jumps.

It sounds obvious, but I totally didn’t get that before. This time with the new animation, I made sure to plan the arcs of the tail (using the Blue Pencil Maya plugin) so that the tail movement fit the body:

The new arcs are much smoother and prettier!

If you want a breakdown of how I animated the squirrel, it was the main body control first, then spine, head, mouth, ears and finally the tail. When animating the tail, I tried to copy/paste the curves of the first joint down onto the second joint, but the result was a big wave that wasn’t even following the arcs that I wanted, so I pretty much tweaked the whole tail as one once the key poses were in. This is what it looked like in the end:

Thanks to stepping away from the animation and coming back, I think the results are much more satisfying than my previous attempt. Maybe a month from now, I’ll see even more areas for improvement.

In short, if you have a shot that you think is polished and you can’t see anything wrong with it, give it time. Move on to something else, grab a croissant and come back when you can view your piece like new. Maybe something will reveal itself as an area to fix. Then you can grab another croissant and get to work!