10 Gems of Knowledge You Should Know Before Directing 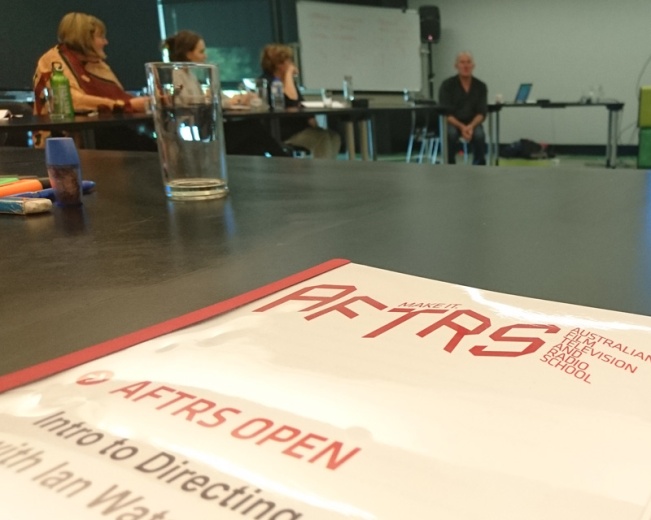 This past weekend I attended a short course through AFTRS (Australian Film Television and Radio School) called ‘Introduction to Directing’. The host was Ian Watson, an Australian director who has directed on various successful TV shows including ‘Underbelly’.

Let me tell you I did not have high hopes. All I was hoping for was at least 1 new piece of knowledge and that anyone sitting next to me would wake me nicely if I drooled over their elbow.

I was ecstatically wrong. There was a wealth of knowledge and my eyelids remained snapped open (despite the fact that I’d had only 2 hours sleep).

Instead of wading through this Scrooge McDuck wealth of knowledge, I’ve decided to pluck out the real gems that made my ears prick up. The ones that you could make some giant earrings out of and still have some left for a set of grillz.

1. Make the premise as short as possible.

Every scene, every script, every beat has a premise, a concept that it is trying to convey. Figure out what it is and make it short. For example, you could be wanting to drive conflict by telling actors the premise for a scene is:

OR you could achieve the same result by saying:

There can be a tendency to want to control a lot in a small team. You have to trust that everyone knows what they’re doing. Let them do what they’re there to do.

3. Every time we cut, we break tension.

This is something that made complete sense when I heard it, but I had never actually considered. It’s possibly why the infamous “long take” shot in Children of Men (Alfonso Cuarón, 2006) makes me feel so uptight. In this shot, I feel as if the world is incredibly fraught with danger for Clive Owen’s character because you never get a break from following him, you aren’t offered another perspective and everything happens in real time. It’s a relentless way of forcing the audience to stay within the moment.

4. Use cuts to punctuate beats.

One of our exercises was to physically direct a short scene in a script consisting of about 5 beats. One person wanted to shoot the whole scene as one shot.

This choice was completely fine but it meant that any changing beats were not defined by cuts. It could read like theatre, as if we’re just recording the action. Even if you as a director can “feel” the beats being played out using one shot, the audience may not. Adding cuts punctuates these beats.

If you’re going to do away with cuts, than you will have to find other ways to define the beats.

Another person in the class pointed out how incredibly involved we were becoming in the minutiae of the scenes, the beats and the premise. Is this involvement with all the small details actually getting through to the audience? Would they recognise these details?

Ian gave us an analogy about builders, something to the affect of:

What Ian was saying was that by being involved in the minutiae, you can make sure that a story is coherent. An audience won’t see all the thoughts that have gone into the foundations like the premise but they will understand the story overall. And even if they can’t articulate why they feel this way, they will understand that the story has been told well and maybe they’ll say:

6. Know who is driving the scene.

In a scene, even in shots, there tends to be one character who’s intention is more dominant than other characters or elements. Their intention is probably driving the story forward. This character is said to be “driving the scene”. It’s important to understand which character this is so that you can give them more screen space or screen time.

In this scene, Remy (the grey rat) is telling Emile (the brown rat) about his passion: food. When he discovers that Emile has a fantastic piece of cheese in his bag, he can’t contain his excitement. This translates to Remy being the more animated of the two and the character the camera follows more. Emile’s movements are smaller so as not to draw the focus away from Remy and he is awarded less screen time.

Despite Remy being the main character for the film, he doesn’t drive every scene. In this scene:

– Remy is trying to help Linguini the chef to cook. Linguini is venting his frustration at how Remy is biting and scratching him under his shirt in a bid to control his movements.

Linguini is driving the scene. This means that most of the shots are shot at human eye level, rather than at the eye level of Remy. As a result, Remy is smaller on screen and his intentions are diminished along with the size of his character. This makes us feel as if we are with Linguini and reinforces the fact that his motivations are driving the scene.

7. Actors are the guardians of their character.

This is particularly true for episodic actors who have a history of playing this character. They are likely to know how the character will react and feel in certain situations.

If you as a director are uncertain of whether an actor should, say, deliver a line with sincerity or sarcasm, it is important to consult the actor on how they feel the character would act. Actors can help you to maintain consistency with the character by protecting their character’s behaviours.

8. You don’t have to play games with actors.

I asked Ian: “If you wanted an actor to feel intimated in the shot, would you as a director go about bullying them on set to make them feel intimidated?”

Ian responded with how he doesn’t play games with actors.Allegedly some directors do “monster” their actors, but you don’t have to. Ian knows he can achieve the results he wants in other ways. Part of that is in respecting an actor’s process and in recognising when they’re about to “pop”. If they’re about to give you the performance you need (eg. about to cry), you can rework your shooting schedule to shoot their crying shots first.

9. Tension is the enemy of the actor.

Actors spend time learning to relax so they can embrace their role. Bringing tension to the set can mess with their process.

So try to keep the set relaxed. Chill.

And finally, my absolute favourite lesson of the day was simply this: