3 Weird Facts About Winged Creatures I Learnt Through Animation 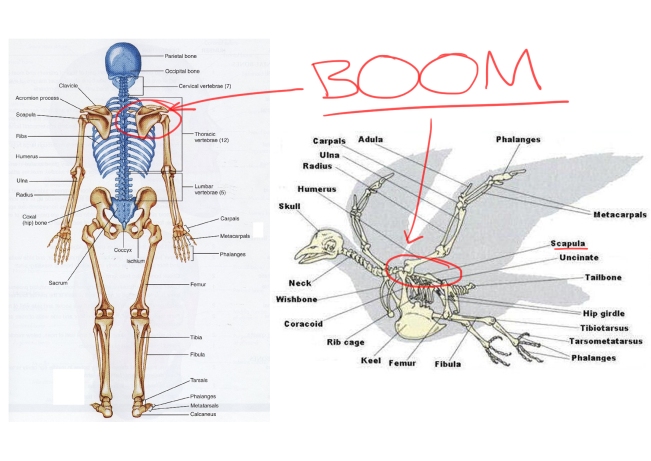 Question: Have you ever ACTUALLY looked at bat feet or how a bird’s wings connect to their skeleton?

No? Well you’re in for a freaky ride. This is all stuff I’ve learnt while having to animate winged creatures at Alt. vfx. In no way am I an expert, these are just things that have come up over and over again through observation. To any biologists out there, feel free correct me if I’m not on the money.

Let’s start with birds. This:

One feathered dinosaur and one hairless ape. Source: Biology Corner

– is a bird skeleton compared to a human skeleton. So let’s play spot the difference! First, take a squizz at that wing and the human arm. In general the bone hierarchy lines up:

I would eat all three wings in deep-fried form. Source: ASU School of Life Sciences

BUT there is something that makes a big difference between the human skeleton and the bird skeleton that I bet you haven’t considered (because I know I didn’t). Anyone spot it? Anyone?

– RIGHT THERE. THEIR SCAPULAS ARE WEIRD!

To be fair, bird scapulas (or “shoulder blades”) seem to vary from species to species, but for birds of flight, it seems  that the scapulas are weird in the sense that they’re not as flat or as wide as a human scapula.  They’re kind of small and spindly and more tucked into the spine then ours. And from what I’ve read, the point of it being different from ours is that it forms a canal for the tendon of a muscle to poke through to the wing and allow the bird to lift its wing up in flight.

Crazy right? There’s basically a hole for muscle to poke through. And so what it may imply is that realistically birds might have trouble doing this:

Yup, SHRUGGING. All of those muscles attached to our flat scapula help us to lift our shoulders as a response when someone asks you if that segregated steak is ok to eat (which it is if you like food the cat licked). As birds don’t have the same shoulder blade structure, who knows if they could actually express this confused nonchalant-ness?

But a small scapula is not really the end of the world. From what I’ve observed, that gap created by their scapula gives them a range of motion in their wings that us humans can only envy, particularly with small birds. At their highest point when flapping, their wings can practically touch behind their back. If you tried to stretch your arms straight behind you, you could get your hands to touch but maybe only at a low point. Those damn scaps get in the way, limiting your flexibility. You could only get them up higher behind you if you dislocate your shoulders like some crazy street magician.

In short, bird scapulas are weird (but also kind of cool).

Handcuffs would not hold this guy. Source: All Type News.

Let’s now kick it over to bat legs. They are CRAY-ZY.

I first noticed them when I worked on a bat for this Toyota commercial running in Japan:

I did most of the layout and created the background bat cycle used in the simulation for the bat cave shot above.

What I was surprised by when working on this was the model for the bat. When I first saw it, I was like:

“Those feet are backwards. Their heels look like they’re facing the same way as the head!” 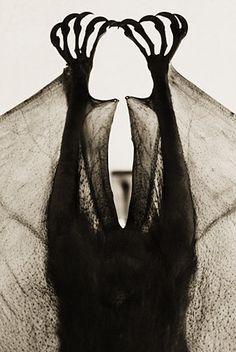 What direction ARE they facing? Source: FFFFOUND!

To be sure, I checked image after image, only to find that it’s really hard to tell if bat feet are coming or going from pictures alone. So after some convincing from a work colleague and a trip to the museum, I realised that I was completely wrong. BAT FEET ARE AS WEIRD AS BIRD SCAPULAS.

But the weirdness is not totally isolated to their feet either, it’s kind of in their whole leg structure. According to the Natural History Museum:

‘[Bat] legs are attached so that the knees bend the opposite way to those of humans: backwards and outwards instead of forwards.’

A trip to the Queensland Museum confirmed this on various bat skeletons. Not only that, but according to one of the friendly museum employees, bats have almost 180 degrees of inflection in the feet. Meaning they can practically FLIP THEIR FEET TO FACE EITHER WAY.

Backward knees AND extreme Mary Poppins feet? Where does the weirdness end?!

Probably here. Because the last little nugget of weirdness I’ve got for ya is this: bird collar bones (clavicles) fuse together to form a strut called a furcula.

And do you know what we commonly call the furcula?

That’s right, A WISHBONE. Every time you are eating that delicious chicken and then turning to your neighbour to see who can snap off the bigger part of the wishbone, know this: you are snapping a bird’s collar bone. AHHHHHH!!! Horrifying! I can practically feel my collar bones wincing in terror!

It’s probably not as bad as actually eating the bird, but still, you know……………….ow.

If anyone would like tips for animating a flying bird, check out this article. It has some gems of wisdom that don’t involve broken bones :).